When you migrate permission lists and portal registries from one database to another, Portal Security Sync process has to be run in the target environment for these permission lists and portal registries to take effect. If your company has separate roles for PeopleSoft Admin and Security Admin, you also have the option of ignoring to migrate the roles and permissions and letting your Security Admin perform these tasks manually, followed by Portal Security Sync process.
The reason why Portal Sync is needed is because portal object security settings get unsynchronized when portal objects are moved from one database to another using the Project Copy feature in PeopleSoft Application Designer. When you merge projects this way, if the projects contain any portal objects with identical names, the security settings of the portal objects in the last project copied overwrite the security settings of portal objects copied earlier. Also, when a copied portal object doesn’t overwrite an existing object, it changes the structure of the resulting portal registry hierarchy.

The portal objects are synchronized as follows for the specified local portal name:

Your PeopleSoft application is at a risk of getting HACKED..

Things To Keep In Mind Before Assigning PeopleSoft Administrator Role 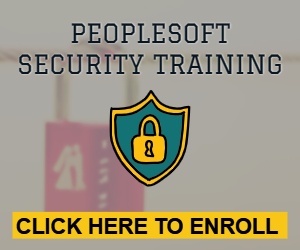