Considerations When Choosing PeopleSoft Base Language 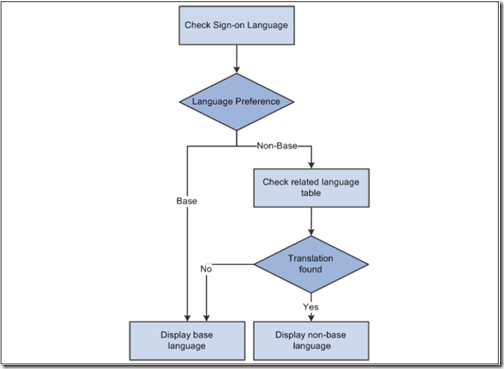 While most of these queries typically occur very quickly, they still take up valuable processing time. If your system is prone to slow performance say during during peak hours, this action can further increase the performance problems. To optimize
performance you can set the base language of your database as the language that is used most often by your users. Another consideration is that because PeopleSoft databases are shipped with a base language of English, maintenance is simpler if English remains the base language.

Also, when you apply the product pack, you can ignore other languages (not used by your organization) and save a bit of space because of this. The downside of such an action is that in the future if your organization decides to use a new language and you don’t have it installed, you will have to apply the language translation packs otherwise the pages will get displayed in English or the default language only. Choosing other languages during the installation is much easier than having to visit it later on and applying language packs.

To create an Oracle Unicode database, you must specify the character set as either AL32UTF8 or UTF-8 in the CREATE DATABASE statement. The default value for an Oracle Unicode database is AL32UTF8 although UTF-8 is also supported. The difference between the two is that the newer AL32UTF8 supports Unicode supplementary characters. These supplementary characters are not used currently by PeopleSoft applications.

In addition, for certain installation configurations (described in the sections cited below), you must specify the following init.ora parameter: NLS_LENGTH_SEMANTICS=CHAR.

4 Frameworks to get the most out of your PeopleSoft applications