PeopleSoft uses DPK for almost all kinds of install and deployment which are delivered in zip files.

Have you ever wondered what those DPK files that you download and deploy contains?

In this post we will go over the contents of DPK files.

These zipped files contains the software and scripts used for PI deployment. So you need to make sure that these files are downloaded completely.

Here is an example from the PeopleSoft Virtual Box Image 30. This PI had 13 zip files

Part 1  – Bootstrap DPK
This is the first part that you need to extract to start the process of DPK deployment and this contains the bootstrap script for extracting remaining zipped files and start the configuration.  It also has python and puppet files.

Part 2 , 3 – PeopleTools DPK
This contains the DPK files for PeopleTools deployment for the PeopleSoft Image. Software such as Weblogic, JDK, Jre, Tuxedo are included in this.

Total number for parts available for download and their content may vary between different PeopleSoft Image or other DPK types.

Always refer to the manifest for these DPK files to verify the content and software version.

What is a PeopleSoft Image Manifest?

All the above questions are answered in the Image manifest.

Image Manifest is the document that is provided with each PeopleSoft Image DPK and contains the list of content of DPK files as well as the version of software such as PeopleTools, Oracle Server and Client, Elasticsearch etc. 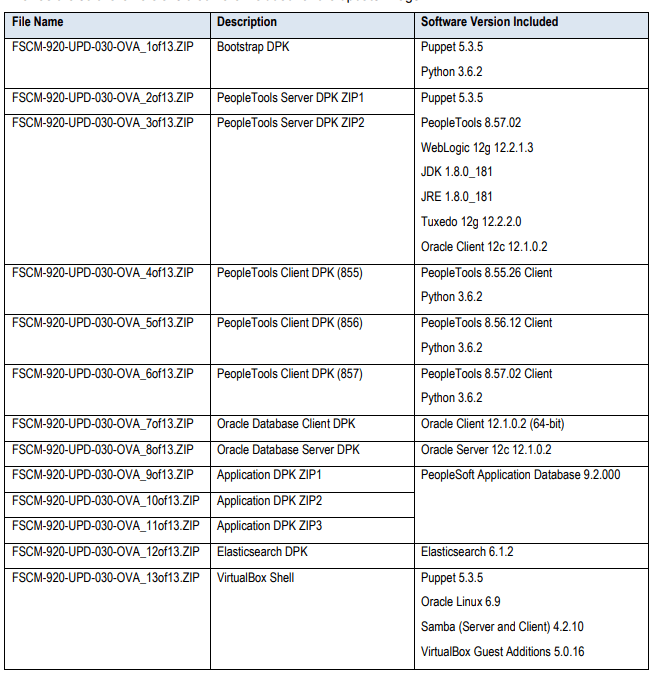 Now you are aware of what is in PeopleSoft DPK files and how to check the software version of PI.

How To Change Default Location Of Virtual Box Image Files