PeopleSoft Images have been made available for over an year now and you might have deployed one or more types of these PeopleSoft images. But you may still get some errors while deploying Virtual Images. One of the most common error that you may get is when you try to import these PeopleSoft Images into Oracle Virtual Box. Here is a screenshot of an error and possible solutions for the same. 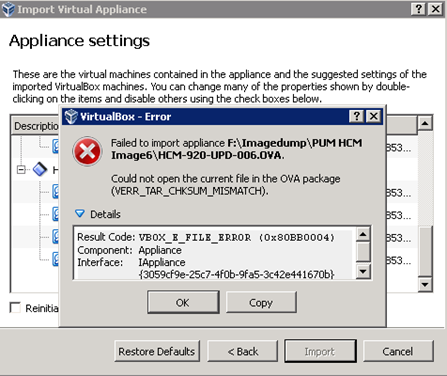 This error is most probably caused due to the corrupt Image file that you’re are trying to import in Oracle Virtual Box. Error message also suggests that it’s failing due to check sum mismatch (VERR_TAR_CHKSUM_MISMATCH). For PeopleSoft Images here are few things that you can check.

Note: With PeopleSoft Image 6, you must use Oracle Virtual Box 4.3.8 or higher (see above screenshot)

How To Change Default Location Of Virtual Box Image Files