Depending on user’s role you can grant read/write access or read only access. In both the cases developer should be able to open the objects in application designer. But what if the user is configured to have application designer access but when trying to open a PeopleTools object,  getting an error such as shown below.

Error: You do not have permission to edit or view DBFIELD.EXT_ORG_ID 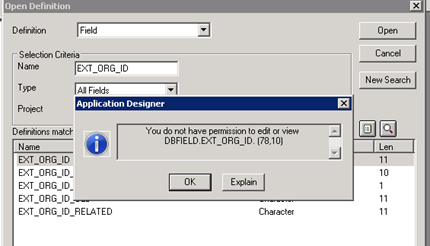 Cause: This issue is caused due to definition security. Definition Security is used to control user’s access to PeopleTools object definitions and is configured using primary permission list.

Step2: You would need to access PeopleSoft Application Designer with an user id that has super user access (atleast have access to open definition security menu as shown below). 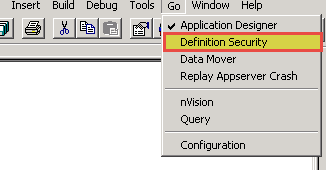 On next screen, you will be shown definition security groups and there will be 2 columns. Column on the right shows the groups that are not linked to any active permission list and column on the left represents the groups that can be accessed by the chosen permission list. Now select the definition group in right column which includes your object/object type and use the arrows to move it to the left column. Go to File > Save. 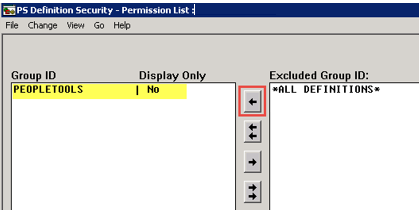 This should fix your issue.

You can use definition security to restrict access to particular object types too, for e.g. you don’t want certain set of users to access PeopleSoft queries, than you can create a new definition group and include query object definition type in it and configure definition security for user’s primary permission list accordingly.

Let me know in comments, if you’ve faced similar issue or if there is any alternate solution.

Find Users Who Have Access To PeopleSoft DataMover. Superfast!!